Afghanistan: “Our Kunduz hospital was on the frontline”

Since this article was published our hospital has been bombed, killing 12 staff and seven patients and wounding dozens more. This article now stands as a tribute to their dedication, skill and humanity.

Dr Masood Nasim is leading the medical team at Médecins Sans Frontières/Doctors Without Borders' (MSF) trauma hospital in Kunduz, northern Afghanistan. He describes the first 72 hours in the hospital after fighting engulfed Kunduz city on 28 September.

“Early on Monday morning, I came to MSF’s hospital here in Kunduz after hearing increasing shouting and the sound of shells falling.

By midday our hospital was on the frontline, with fighting right outside the gate. You could hear the sound of shelling, rockets and airplanes.

Some bullets have come into the hospital, some even through the roof of the intensive care unit. But despite being in the middle of the fighting, our hospital and staff have been respected and we’ve been able to carry on our work.

Since Monday morning, we’ve received 296 wounded patients, including 64 children. Seventy-four of our patients arrived in a critical condition. Most have gunshot wounds from being caught in the crossfire.

Our surgeons have been treating very severe abdominal wounds and limb and head injuries.

The hospital has been completely full of patients. We normally have a capacity of 92 beds, but we expanded immediately and increased the number of beds to 150.

There have been patients in the offices, in the examination rooms, and being stabilised on mattresses on the floor.

We are trying to treat as many people as possible, and our team is working non-stop to provide life-saving care. We have carried out 90 surgeries over the past two days.

We have 400 Afghan staff and ten international staff. They’ve worked for two days in a row without any sleep, and are completely exhausted. We are trying to give them the space to regain their energy and also trying to bring in more staff.

Since we opened the hospital in August 2011, we have been receiving large numbers of patients injured in fighting, so our staff is very experienced and efficient at dealing with multiple casualties.

But what makes this different is that instead of receiving an influx of wounded over a short period, we have been receiving a huge number of patients constantly, all in a very critical condition.

It is very difficult to manage as there is no time to recuperate or restock supplies.

We’re trying to get a new team in and to bring in more medical supplies, but it’s a huge struggle because of the active fighting.

As this situation carries on for longer and longer, it becomes increasingly challenging.

We are really very worried about how we will continue to cope with the number of patients. 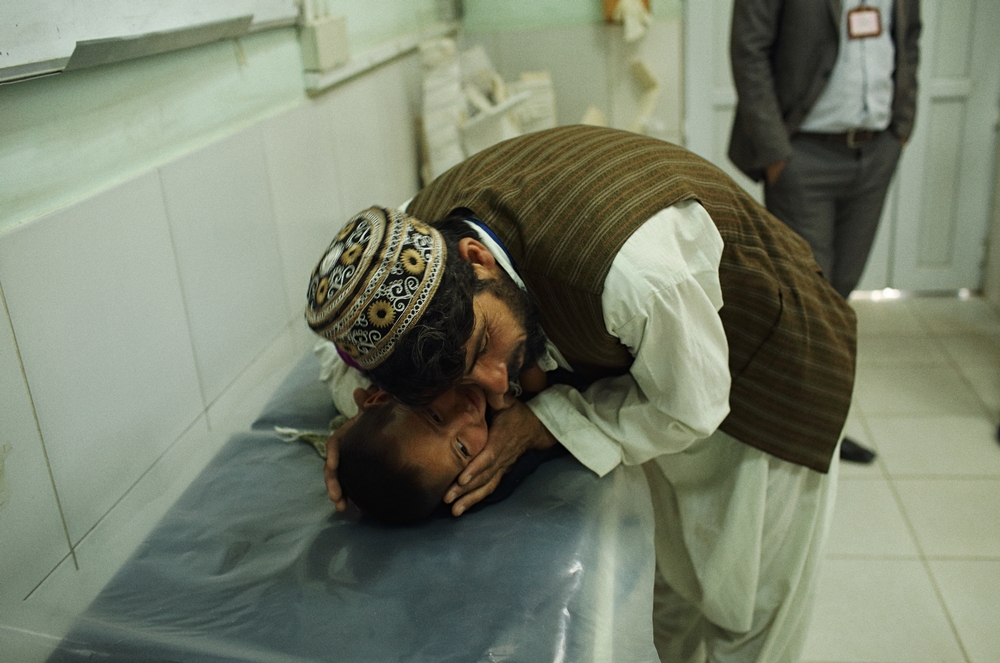 Andrew Quilty / Oculi/Oculi
Qudus brought his four year old dauger to the trauma centre in May 2015.

For days this has been the only functioning hospital in the area, and we are receiving wounded from across the city. We treat women, men, children; civilians and combatants.

We treat everyone, regardless of their ethnicity or political affiliations and as long as they leave their weapons at the door. I’m very proud that we have this specialist trauma hospital, the only one of its kind in the whole north-east of Afghanistan.

Getting used to violence

From time to time the fighting calms, and I’ve been outside the hospital briefly. But all of my energy has been focused on the medical activities here.

I’m Afghan, and I’ve grown up with fighting, shelling and bullets, as has most of our team. No one looks scared. But whether or not you are used to it, when there is violence going on around you, of course you are worried.

It interferes with your normal activities and thinking. You don’t see it, but in your body you feel it.”