The number of people forced to flee their homes in the Lake Chad region has more than doubled due to attacks perpetrated by Boko Haram. The total number of displaced in the area is now 75,000.

The fear instilled in the population – of refugees from Niger, Nigeria and Chadians themselves – is exacerbated by the continued violence. Mental health needs are high, and with this latest rise in attacks, will only continue to grow.

From the start of its response to the crisis in Chad in March this year, Médecins Sans Frontières/Doctors Without Borders (MSF) saw an immediate need to incorporate psychological care into its medical activities.

Today, working in the Dar Es Salam refugee camp in the Lake Chad region, MSF’s psychologists listen to stories of horror and the ongoing fear that plagues the daily lives of survivors. Among the patients seeking psychological support in MSF’s refugee camp clinic, one in four show signs of depression. Sleeping disorders, severe emotional reactions and trauma-related anxiety reactions are also common.

“I saw Abeni*, a 16-year-old girl who had fled from Baga in Nigeria,” recounts Forline Madjibeye, an MSF psychologist.

“Both of her parents were killed, as well as her neighbours. She took the hand of her little brother and her nephew, as well as the four children who belonged to her neighbours, and eventually she made it here. I spoke with her yesterday and she said she still does not have a refugee card, and is not receiving any food. The children are crying because they are hungry.”

Escaping from this situation and arriving to extremely difficult living conditions only compounds the psychological effects of such trauma.

The responsibility of taking care of six children in a refugee camp, combined with what she has experienced in Nigeria, has taken an enormous toll on Abeni.

She continues to relive the fear, is unable to sleep, and is suffering depression because her future is completely uncertain.

“We want to be able to give back some sense of control to Abeni, so she can better handle the fear and sadness she is experiencing and take care of herself and the children,” continues Forline.

“This is not an easy situation, and others have sadly been through it too. So I encourage her to share her experiences with other refugees, and not to stay at home alone.”

With an increase in violence in the region, insecurity has followed the refugees since the moment of their departure.

Although they may have believed they were fleeing to safety, they are instead still haunted by the events, they do not feel secure. ‘Home’ is now a gathering of exposed tents in the middle of a desert, where they may be vulnerable to further attacks. 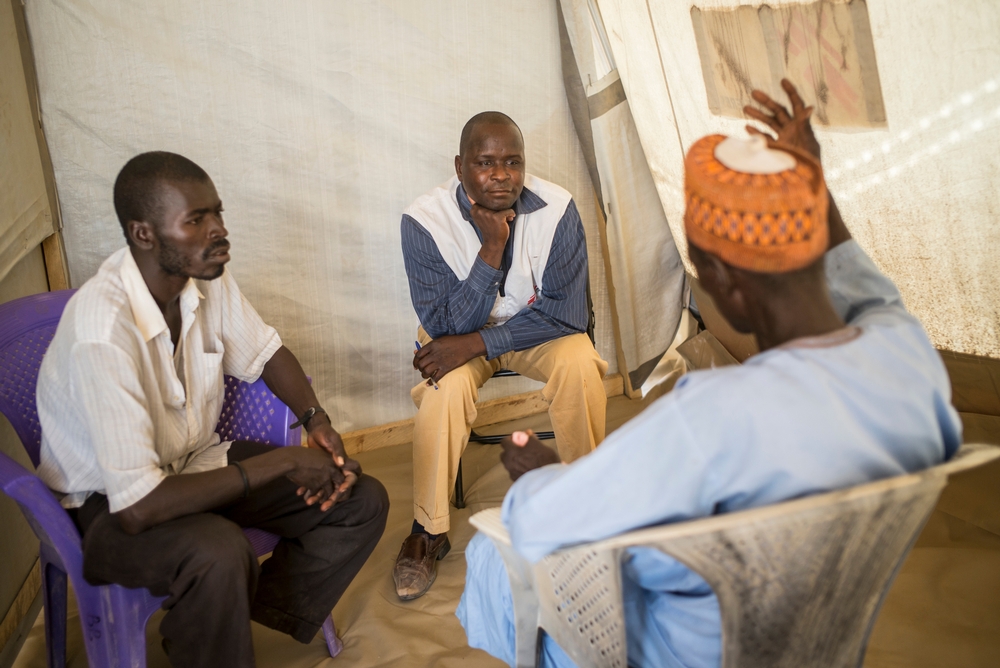 “The process of recovery is long. People have witnessed horrible things, they become refugees, and then they arrive to a camp where life is grim and very tough. Initially, they have post-traumatic stress, they cannot sleep. But then there is no option but to stay.

“You are not only a victim of Boko Haram, you now have to go through the process of accepting life as a refugee, of having to take care of life in a different place, and of having to live with the reality that you have no idea what tomorrow holds.” Aurelia Morabito, a psychologist who has been working for MSF in Lake Chad for the last two months.

Since starting the program in March, MSF psychologists have seen 524 patients. Teams provide individual, family or couple consultations, and children can also partake in a weekly drawing workshop to express what they are feeling.

A picture by a 12-year-old boy, a #Nigerian refugee who fled Boko Haram attacks. This drawing was done in a workshop the #MSF mental health team conducts for children in the Dar Es Salaam refugee camp in #Chad. “It is easier for #children to express their fears through #drawing,” says Aurelia Morabito, an MSF #psychologist. “Afterwards, we talk about the pictures with them and their parents with the aim to help them control their fears. In every session, the children recount horrible stories through their drawings. We see pictures of guns, helicopters and decapitated people. We hear stories of children who left Nigeria, only to experience another attack in Niger, to come back to Nigeria to see the violence again. Many have run alone through the night, or stayed the night hiding in the water, hoping nobody will find them.” © MSF

“It is easier for children to express their fears through drawing,” says Aurelia.

“Afterwards, we talk about the pictures with them and their parents to help them control their fears. In every session, the children recount horrible stories through their drawings.

“We see pictures of guns and helicopters, and decapitated people. We hear stories of children who left Nigeria, only to experience another attack in Niger, to come back to Nigeria to see the violence again.

“Many have run alone through the night, or stayed the night hiding in the water, hoping nobody will find them.”

The MSF mental health team listen to patients in a safe and confidential space for as long as they need, and through acknowledgement of their suffering, help them find the best coping strategies.

“Through our sessions, MSF psychologists listen and try to normalise the reactions of the refugees,” explains Aurelia.

“This helps to stabilise and secure the patient while they connect with others and share experiences.

“We know that we cannot make the suffering go away, but we can help people to deal better with their unbearable reactions.”

In addition to its mental health programme in the Dar Es Salam refugee camp, MSF is also carrying out mobile clinics providing basic healthcare to the resident and displaced population. The organisation will also soon incorporate a mental health component to these mobile clinics.

MSF has been working in Chad for over 30 years. The organisation runs regular programs in Abéché, Am Timan, Massakory and Moissala. In July this year, MSF also started working in Bokoro in Hadjer Lamis province in response to acute malnutrition.

*name has been changed to protect identity

Read more about our work in Chad.