Ebola: “We must finish the job”

Médecins Sans Frontières/Doctors Without Borders (MSF)’s response to the largest Ebola outbreak in history began more than 16 months ago in March 2014 and, despite progress made in the fight against the virus, Ebola stubbornly lives on in Guinea, Sierra Leone and Liberia with more than 27,678 people infected and 11,276 lives lost.

For the past eight weeks, the number of cases in the region has stagnated at around 30 new infections per week, a number that would be considered a disaster in normal circumstances.

MSF International President Dr Joanne Liu declared last week: “We have seen so many reports calling for change, with everyone focused on how to improve future responses to outbreaks and meanwhile, with new Ebola cases each week in the region, we still don`t have the current epidemic under control.

On Ebola, we went from global indifference, to global fear, to global response and now to global fatigue. We must finish the job.” 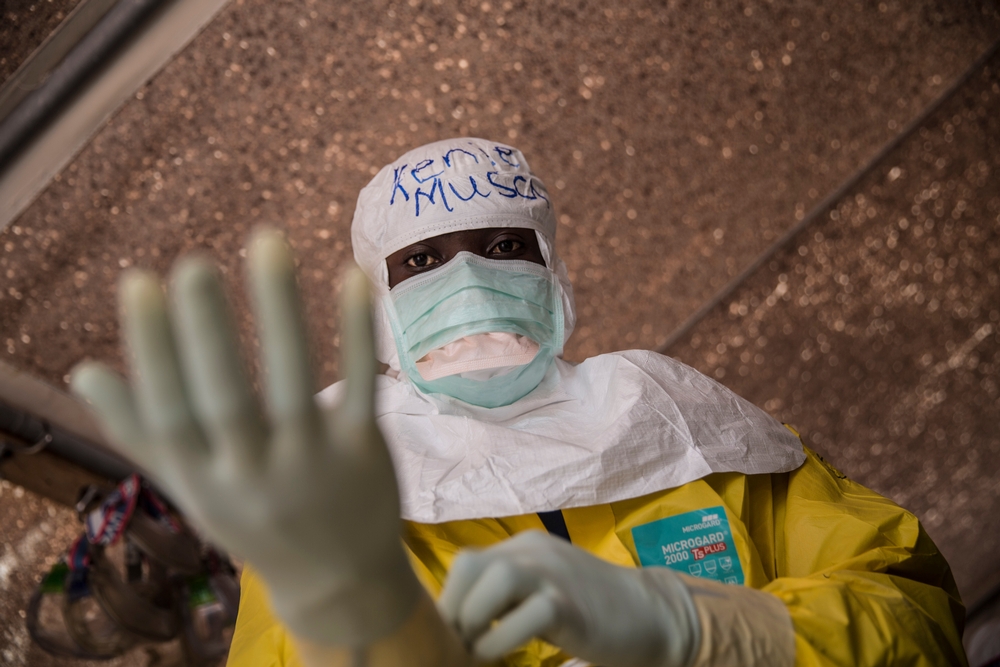 In Guinea, active chains of transmission persist in Conakry, Boké and Forecariah.

“We still have about 12 to 18 cases of Ebola per week in Guinea,” says Anna Halford, MSF Emergency Coordinator in Guinea.

“Ebola cases continue to go undetected for too long, with 25 percent of positive cases identified after death in their communities in the past three weeks.”

In Conakry, MSF has moved from its previous Ebola management centre in Donka to a new facility in Nongo and is continuing outreach activities across the city in order to combat rumors, fear and fatigue.

“We are aware everyone is tired. The national authorities are tired— they have been working on this non-stop and they just want the outbreak to end. The people of Guinea are tired of the uncertainty and fear," says Halford.

“After more than a year of responding to Ebola, we too are tired but the outbreak is not over and we cannot let up until we reach zero.”

In MSF’s Nongo facility, patients have the option to receive plasma donated by survivors of Ebola which, after a trial enrolling 101 patients over the past few months, has been shown to have no ill effects. The results of plasma’s efficacy are not yet publicly available but hopefully will be released by the researchers in the coming weeks.

In response to the recent outbreak in Boké in northern Guinea, MSF’s opened an Ebola management centre on the 3 July. The cluster is worrying given the risk of further geographic spread into neighboring Guinea-Bissau.

In Guinea Bissau MSF is helping prepare for the possibility of an imported case, by facilitating training of health staff and prepositioning supplies for an Ebola response. 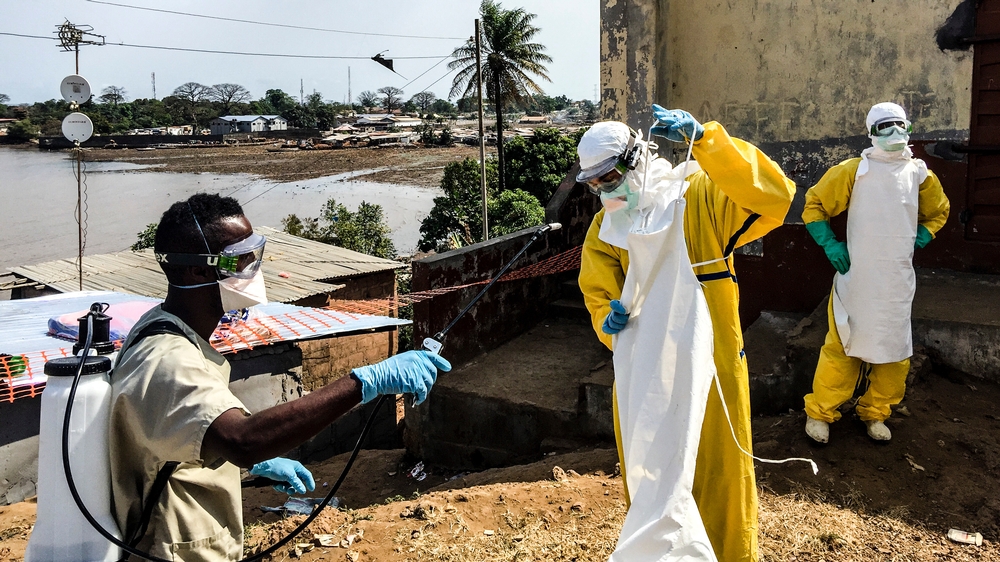 Fabio Basone/MSF
Ivan Quentin is an MSF Water & Sanitation Expert (Watsan) on outreach with his team in Sierra Leone. They visit the qurantined homes of suspected Ebola patients and disinfect their houses to reduce the risk of cross contamination.

In Sierra Leone, the number of Ebola cases continues to fluctuate with 14 cases recorded in the past week and hotspots persisting in Western Area (Freetown), Port Loko and Kambia districts.

Freetown has seen a recent flare of Ebola with 10 confirmed cases recorded in Western Area last week, the highest weekly total since March. MSF has been running an Ebola Maternity Centre in Hastings, with specific obstetric services for Ebola positive pregnant women in need of tailored care.

Additionally in Freetown, MSF teams are focusing on outreach and surveillance activities working in collaboration with the District Ebola Response Committee, who respond to new cases and follow up contacts throughout the 21-day Ebola incubation period.

“It is essential that any suspect case is followed up with a coordinated response, including thorough case investigation and the identification and follow up of contacts for 21 days,” says Jose Hulsenbek, MSF head of mission in Sierra Leone.

“Throughout this process, engaging the community is the key to success in breaking the transmission of the disease.”

Further afield, in Bo District, MSF continues to operate an Ebola Management Centre, covering the south-eastern part of the country. Though no positive cases have been seen for some months, the centre receives suspected Ebola patients each week as part of the ongoing need for proper surveillance. The team also visits neighboring districts to monitor surveillance activities.

With no patients for the last two months, MSF’s Ebola management centre in Magburaka has been closed. However a small team remains in Magburaka and is in the process of opening a clinic offering health services to Ebola survivors.

“It is clear that the work to improve healthcare in Sierra Leone will not end with the epidemic, “says Hulsenbek.

“Even before Ebola, Sierra Leone suffered from an acute shortage of skilled staff, limiting access for the population to key life-saving services. After the loss of more than 220 health workers to Ebola, there is a real need, not for just funding and promises, but for skilled clinicians on the ground across the country.” 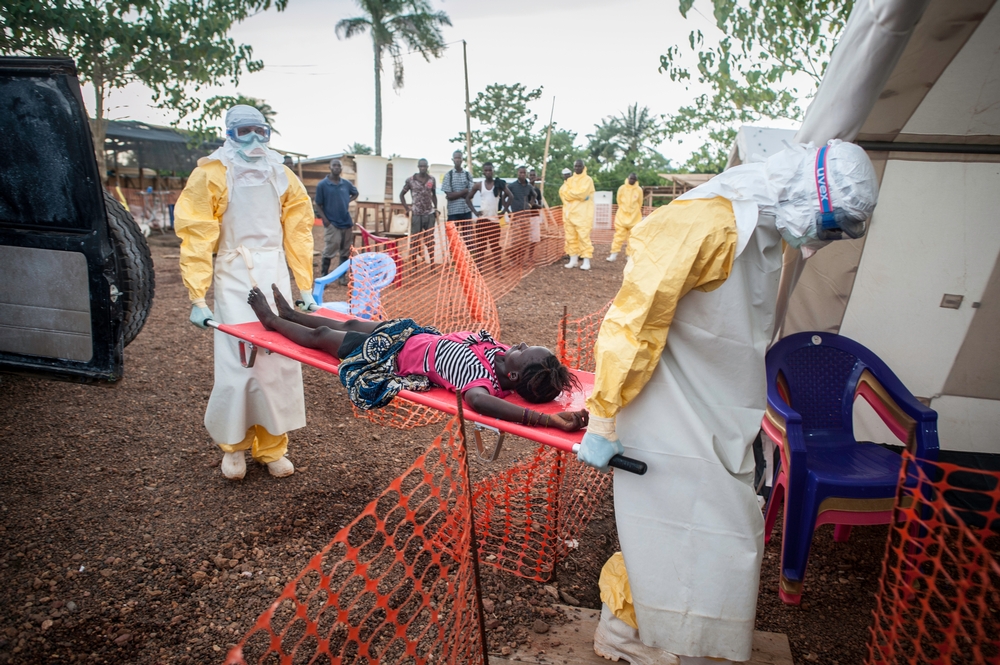 Sylvain Cherkaoui/Cosmos
Two medical staff bring a weak patient who has been in contact with people infected with Ebola to MSF's management centre in Kailahun, Sierra Leone.

Sadly, after being declared Ebola-free on 9 May, following 42 days with no new infections, Liberia is again recording cases of Ebola.

“Though disappointing, the re-emergence of Ebola in Liberia is not altogether unexpected,” says Carissa Guild, medical manager of MSF programmes in Liberia.

“The risk of new cases still exists as long as the virus is present in the region.”

The virus was detected in the swab of a deceased 17-year-old boy on the outskirts of the capital Monrovia, and has since spread to 5 other people.

“These new cases show that vigilance is still key across the region, even in areas declared Ebola-free. We cannot relax until Ebola has been stamped out in all three countries” says Guild.

Deaths of hundreds of health workers

At this time MSF is not directly involved in the patient care or investigation of the new cases, but remains ready to support the Ministry of Health should they require it.

For now, MSF is running a 69 bed paediatric hospital in Monrovia to help restore the secondary health system which like those in Guinea and Sierra Leone has been paralysed following the deaths of hundreds of health workers.

In the grounds of the hospital, MSF also runs a clinic specifically for Ebola survivors who suffer from a number of health complications following their recovery from the virus. 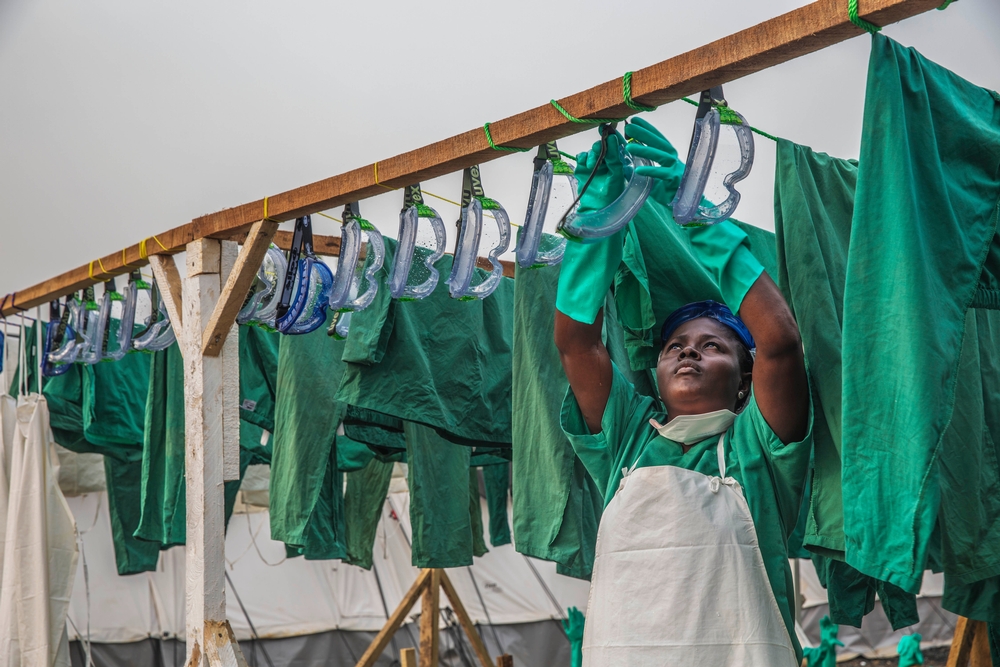 No one was prepared for the scale of this epidemic

“Going from hundreds of cases to 30 per week took considerable time and massive resources, yet getting from 30 to zero requires the most meticulous, difficult work of all,” says Dr. Liu, MSF International President.

“No one was prepared for the scale of this epidemic, the largest in human history, nor that it would last so long. But we cannot lose focus now and must push on until the entire region is declared Ebola free.”

MSF currently employs 92 international and 1,760 local staff in Guinea, Liberia and Sierra Leone and has cared for 9,626 people, including 5,149 confirmed to be infected with Ebola since March 2014.

G7: The world is no better prepared today than a year ago to respond to Ebola

Liberia: Counting the cost of the Ebola outbreak