Iraq: An endless race against time

Seven months in Iraq was quite an assignment for Australian Logistics team leader Robert Onus. It felt like an endless race against time to provide refugees, internally displaced people and local inhabitants with access to humanitarian and medical aid. From securing supplies and managing logistics to rehabilitating health centres, Robert guides us through his assignment with MSF in this region in turmoil.

“There was a big supply component to what I had to do, 75% of the supplies we needed for the country were coming through Dohuk, where I was based. We had to manage importation and exportation, local purchasing, warehousing and transportation to the various other projects.

Another major part of my work was the rehabilitation / construction side of things, as we were preparing to hand over the health centre in one of the refugee camps near Domiz, to the local authorities.

As part of this process, we had to rehabilitate some old buildings, move offices, build new latrines, upgrade the waste management area and various other bits and pieces.

The most challenging aspect was managing the logistics for the mobile clinics project we were running in Ninewa.

Seven out of ten houses damaged or destroyed

This project was based in an area close to the frontlines between ISIS and the Kurdish forces and as it was a long distance from our main office in Dohuk we effectively had to start from scratch. Building a new base, office and housing in a small town in the area.

Finding a house seems simple enough, but in this area seven out of ten houses had been damaged or destroyed in the fighting, and many remained booby trapped or contained unexploded ordnances.

Once we found a house that we could actually rent, we had to do the rehabilitation to meet the needs of the project.

All of this took place in a small village where most people had left due to the war, we had limited access and there were only limited supplies available.

It is hard to describe life here. On one side it is simple, common, and unremarkable. I lived half of my life in Dohuk, a modern city with modern amenities, and the other half working in this rural area close to the frontlines - a small village with only basic conditions.

The area near the frontlines is a vast farmland not dissimilar to north western New South Wales, Australia, where I come from.

Rolling hills are covered in wheat and herds of sheep shuffle across the countryside, they're usually held in check by a young boy sitting sideways on a donkey, his face completely covered by a red and white scarf to hide from the sun.

The conflict in the area we were working seemed to ebb and flow. It would usually remain on the other side of the small mountain range to the south of where we were based.

The sound of coalition jets, sporadic towers of smoke across the mountains, military convoys and seemingly infinite check-points were the only signs that we were in the middle of a war zone.

A destroyed house in Iraq. © MSF

At a personal level the main challenge was certainly the quantity of work we had to achieve across the various projects we were running. The needs are infinite and it is only a lack of resources and the danger associated with accessing certain areas that limits what you can, or might do.

Regardless of whether I worked 12, 14 or 16 hours a day the amount of work I had to do seemed to grow from one day to the next.

When will the situation improve?

For me the most difficult element was trying to imagine the long term solution to this war.

Of course it’s not our mission in MSF - we are here to deal with the medical problems faced by the people, not trying to find the political solution. Yet in previous projects, such as in the Ebola epidemic, it was hard but we knew we could find the solution. In this conflict we are bringing support to people who don’t have anything, and who can say when the general situation here will improve? 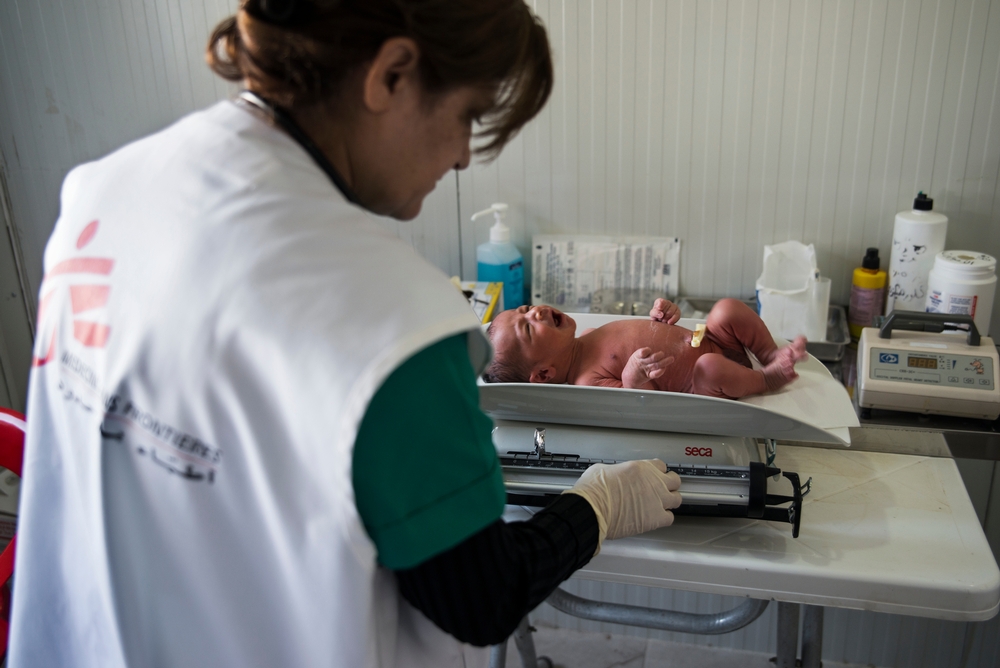 There are camps for refugees and internally displaced people scattered all over the Iraqi Kurdistan autonomous region. In Dohuk Governorate, where I was based, there were 18 camps alone that housed displaced people.

The conditions vary from camp to camp but all suffer the same basic hardships – most people are living one family in a small tent with temperatures fluctuating from below zero in winter to around 50 degrees in summer, with only the most basic access to water and sanitation, food and shelter.

The situation is perhaps even worse for those people who are not in the camps but still living in unfinished buildings and tents scattered around the cities. The buildings are large skeleton-like structures of concrete of several floors high, none of the walls are complete and they provide only the basic concept of shelter.

People use plastic sheeting as walls, but again they have only limited access to water and sanitation. We worked in places where the bottom floor had been transformed into a giant open sewer. It was in the middle of winter, so it was freezing cold, there was rubbish everywhere, and of course people are going to get sick. You are going to have epidemics in this kind of context.

The staff were great

We had staff from Iraq and Syria and they were all exceptionally capable and I relied heavily on them. Outside of work, on the rare weekend when I could take a day off, we would go to the mountains or close to a river for a picnic.

Dohuk Governorate is home to around 500,000 people who are either internally displaced or refugees. Among these people who are living in precarious situations, you have many skilled and motivated people who want to work in any way they can to provide for their families.

We also had a number of our staff who left Iraq to go to Europe in search of a better life, especially those staff who were themselves refugees in Iraq.

Some staff left with their families, despite knowing the risks they faced, they saw no alternative.

Many cities in Syria are destroyed, there is no hope of return, and the future of the whole country is under a heavy cloud. So what can you do? Live the rest of your life in uncertainty and wait for this protracted war to end for a chance to go home? Or try to build a life somewhere?"

Find out more about our work in Iraq