Médecins Sans Frontières/Doctors without Borders (MSF) is responding to an outbreak of cholera in a remote corner of Nigeria.

In under a month, there have been 4,500 cases and 70 deaths from cholera in Borno State’s capital Maiduguri, where the number of cases continues to rise.

MSF provided assistance during a previous cholera outbreak in Maiduguri in 2010 and set up a 120-bed cholera treatment centre (CTC) in the town’s hospital. Due to this latest epidemic, MSF has decided to re-open the CTC and increase the number of beds to 150.

Eight MSF staff members, working in cooperation with Ministry of Health personnel, are providing care for the most serious cases and have treated 1,912 people so far.

MSF has also set up five preventive oral rehydration points in several of the town’s districts. Easy to install, these give people access to oral rehydration solutions. Action Contre la Faim/Action Against Hunger (ACF) is looking into assisting with water, hygiene and sanitation activities.

Cholera epidemics are frequent in Nigeria, an outbreak occurred in Bauchi state, also in the north east of the country, in January this year. MSF teams were able to provide treatment in a CTC to 8,500 of the 15,500 people who contracted the disease.

Three to five million people globally fall victim to cholera every year. An acute infection of the intestine, cholera is highly contagious and is transmitted by ingesting food and water contaminated by the bacterium or faeces.

The disease kills 100,000 to 120,000 people every year – among which young children and the elderly are particularly at risk. Cholera often occurs in over-crowded places where clean water, refuse collection and lavatories are lacking or inadequate. 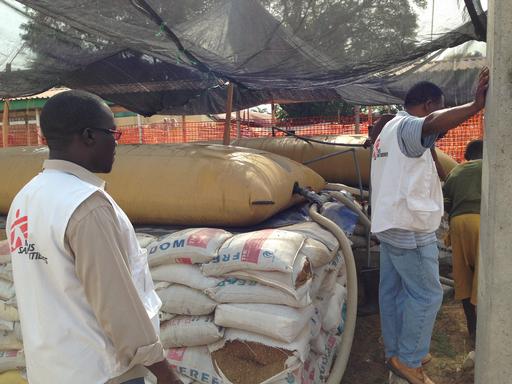 MSF are aiming to prevent further cases of cholera by chlorinating the local water supply.

Principal symptoms of cholera are watery diarrhoea and vomiting, which can rapidly lead to severe dehydration and amongst the most vulnerable, death.

Despite its severity, cholera is easy to cure if it is treated promptly. Treatment consists of replacing lost fluids and salts to prevent dehydration—rehydration salts are administered orally.

Very seriously ill patients must be admitted to hospital and some may require up to eight to twelve litres of intravenous fluids a day as well as antibiotics. In spite of the speed at which the symptoms appear, recovery can be just as spectacular as, after only a few days of treatment, the bacteria disappear and patients return to good health.

In May 2013, the government declared a state of emergency in Borno, Yobe and Adamawa States after the radicalisation of Islamist movement Boko Haram, particularly active in the north east of Nigeria.

MSF initiated a first intervention in Borno State after an attack on the town of Baga in May 2013 but was quickly forced to close down its activities because of the mounting insecurity.

Sometime later, an exploratory mission was carried out in Chibok in the south of the state and 3,760 people were treated. Over half were children under the age of five, many of whom were suffering from malnutrition. After working in the area for ten weeks, in October 2013 operations had to be suspended yet again for security reasons.

MSF returned to Maiduguri again in May 2014 and is providing support to both permanent and mobile medical clinics in two of the town’s three displaced persons camps. These camps host refugees who have fled from Boko Haram attacks in the surrounding region.

There are now 58,000 people living in the three camps and the National Emergency Management Agency (NEMA) estimates that the total number of displaced people is 350,000.

MSF is able to continue its work combatting the cholera epidemic in the town as it has not been subjected to attack for some time and the situation is calm. Yobe, Borno and Adamawa States are extremely remote and the restrictions on people getting in and out are taking their toll on trade and the local economy.

In Borno State, access to healthcare is wholly inadequate for displaced people, Maiduguri’s vulnerable inhabitants and the population in general.

Find out more about MSF's work in Nigeria