The closure of the border between Hungary and Serbia has lead to a rapidly increasing number of refugees being stranded on the Serbian side.

Part of the Médecins Sans Frontières/Doctors Without Borders (MSF) team that was working in Roszke (Hungary) is currently supporting the teams in Horgos (Serbia), and is monitoring the situation of those stranded along the border.

Around 5,000 people gathered yesterday in the no man’s land between border controls, blocked by the fence erected by Hungary. MSF is working to ensure a 24 hour provision of medical support at the border and is distributing tents to the families.

We are also sending teams to assess the situation on the Serbia-Croatia border as people start to cross it.

“Closing borders is not a solution, it just pushes responsibility to neighbouring countries and forces people to take more risks and makes their journey even harder, with a clear impact on their health” says Ana de Lemos, MSF project coordinator.

The camp in Roszke, Hungary, has been a crossing point for between 2,000 and 4,000 people every day in the last few weeks, but was abruptly emptied by the authorities.

The people there were transported first in buses and later on in trains towards the Austrian border.

The MSF teams worked through Sunday night and the whole of Monday until the last train departed. Despite the difficult circumstances, the teams managed to assist about 500 refugees, helping pregnant women, treating wounds and respiratory problems. 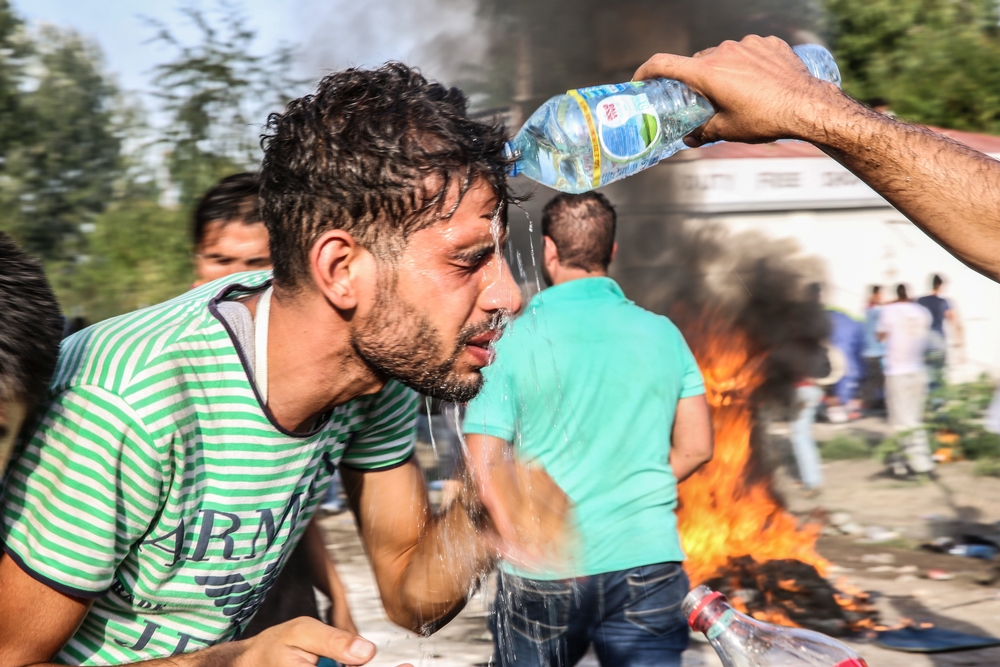 Juan Carlos Tomasi/MSF
A man is helped to wash tear gas out of his eyes at the Serbia Hungary border.

Once the camp and the train station had emptied, the team in Roszke crossed over the border to support the team in Serbia, which has been assisting refugees in Subotica, Horgos, Belgrade and Presevo since December 2014 with medical mobile clinics and relief items.

In addition to treating mainly skin infections and respiratory tract infections – the direct result of the people’s living conditions on the journey through Greece and the Balkans – MSF is also providing mental health support.

A total of 5,072 consultations have been carried out in Serbia between late 2014 and 31 August.

“The people stranded on the Serbia-Hungary border are currently in a limbo situation, not able to go back or move forward with no answers whatsoever where to find protection,” said Aurelie Ponthieu, MSF humanitarian advisor on displacement.

“They haven't crossed a single European country which has been able to respond adequately to their needs.

"This shows the absurdity of the current European response to this refugee situation."

Find out more about MSF's work with displaced people and refugees