For the first two months of her life, Mary James slept with no blanket on a steel bedframe inside a small, damp shelter in the middle of an overcrowded displaced persons camp. Now, she’s sleeping in an MSF hospital bed, fighting to survive.

Each time the three-month-old exhales, it makes a rasping sound as her breath forces its way through her tiny, infected lungs.

When the infant cries, her body contorts with the effort of breathing. Until recently, she’s been connected to an oxygen machine to support her breathing.

As the cold season sets in, children like Mary suffering from pneumonia and other respiratory tract infections make up over half of the admissions to the pediatric ward in the MSF hospital, which is the main provider of inpatient secondary healthcare in the camp.

Recently, a malaria outbreak filled the hospital with convulsing children. As beds filled up, many patients slept on mattresses on the floor. 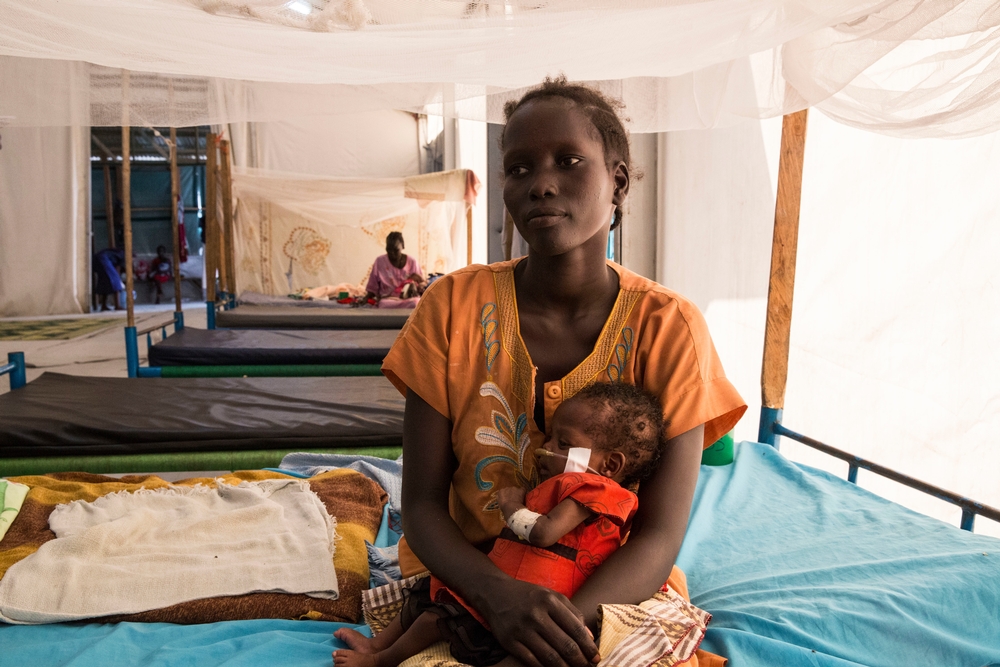 Anna Surinyach/MSF
Three-month-old Mary James is being treated by medical staff in the Malakal Protection of Civilians camp in South Sudan.

“The root cause of these illnesses is overcrowding and sub-standard living conditions,” says MSF medical doctor Yasser Sharaf as he makes the morning rounds.

Outside the hospital gate, nearly 50,000 people are sheltering in thousands of tents and shelters packed so tightly together that residents walk sideways through some of the narrowest passages.

Arriving at the camp with almost nothing

The families living in the worst areas arrived three months ago, when 16,000 people fled an upsurge of conflict, violence and malnutrition.

Most travelled at night in small canoes from nearby Wau Shilluk, on the opposite side of the White Nile River, where humanitarian assistance had been cut off for months.

They arrived to the camp with almost nothing.

Nya Gaw, 40, pictured in the PoC in Malakal

Formerly a midwife with a career and middle-class home, Nya is now almost completely reliant on humanitarian assistance.

In the PoC, she lives with 55 other people in a dirt-floored communal tent. Sitting in her tiny living space, she removes the stems from a pile of leafy greens known as Lum. It’s a food-of-last-resort foraged from outside the camp to supplement her meager monthly food rations.

Nya arrived with two sons but her family has grown bigger since she came here. In spite of her difficult circumstances, Nya has taken in four other children who were separated from their parents during the conflict. Nobody knows where they are. Together, Nya’s expanded family shares a single cot and a couple plastic mats on the floor for sleeping. Their living space is the size of a single bedroom.

At night, it is getting increasingly damp and chilly, and the air buzzes with mosquitos. The narrow ditches and alleys that separate Nya’s tent from the others around it are filled with mud and stagnant water.

There are barely more than four square meters of space per person in this area of the camp – less than one seventh the minimum space required by international humanitarian standards.

Put simply, Nya’s living conditions are a recipe for disease. She says that two children living in her tent have been admitted to the MSF hospital recently, gesturing to their families’ equally-cramped living areas.

“At night, everyone is coughing and sickness is spreading,” says Nya, a comment echoed by many mothers in the camp. “We need more space.”

Only about half of a square kilometer has been allocated by the United Nations for families like Nya’s sheltering in the camp to actually live in. More room is urgently needed. Presently, there is not enough space to expand life-sustaining services like water points, bathing areas and latrines – never mind adequate schools, recreational spaces or markets.

Lack of water and latrines

About 200 meters from Nya’s tent, a set of taps is surrounded by winding lines of jerry cans. The taps are connected to a bladder which is filled with water twice a day, but never stays full.

A group of women has been waiting in line for hours, but they don’t always get the water they need.

Latrines are a bigger problem. With less than one latrine for every 70 people in the largest section of the camp, one woman complains people are defecating in the few showers available for hygiene. 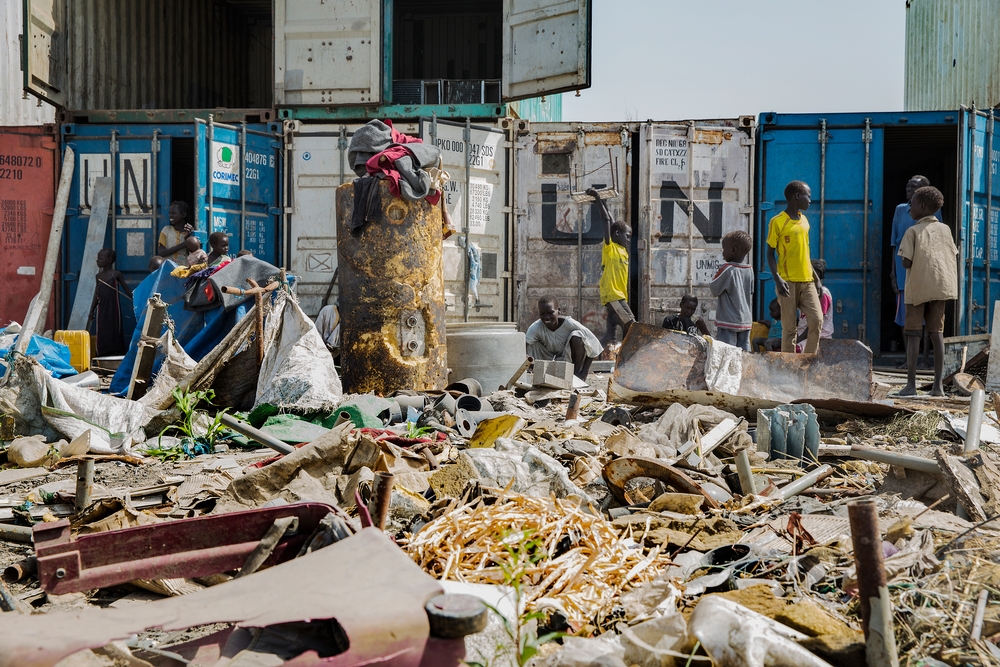 Anna Surinyach/MSF
Displaced people in the camps within the UN compound in Malakal, South Sudan.

In these conditions, it is no surprise that queues for the few primary healthcare centres in the camp often form before sunrise.

The clinics close at five pm and every second Sunday there is no primary healthcare available at all. When those tent clinics are closed, long lines form at the emergency room in the MSF hospital.

Too many of those patients, like young Mary James, arrive in serious conditions.

Back at the MSF hospital, it is now evening time and Mary is doing much better. She is sleeping under a mosquito net for her last night in the hospital.

Sadly, when she leaves, she’ll return to the same cold shelter in the same crowded cramp, where she is likely to get sick again. 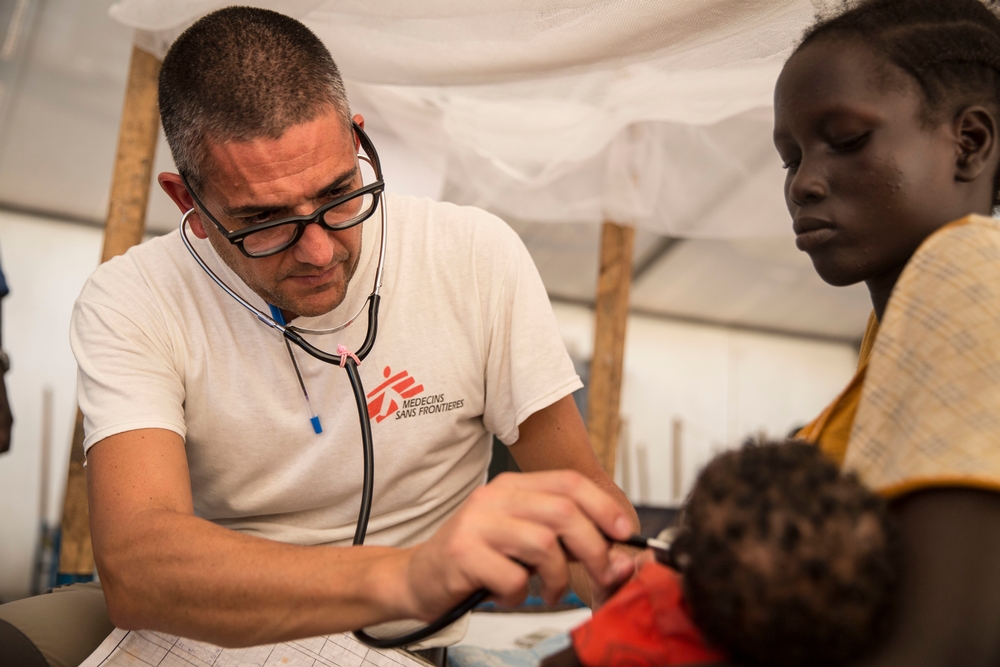 “The sickness of our patients is directly related to the overcrowded and deplorable conditions in which they are living,” says Monica Camacho, MSF programme manager for South Sudan.

“More space must be immediately allocated for the population seeking shelter and humanitarian actors must urgently improve the provision of basic services and necessities.”

In recent weeks, the MSF hospital has been filled beyond its capacity with children suffering from life-threatening cases of pneumonia, malaria and other illnesses.

The number of patients treated for severe respiratory tract infections has already tripled since September.

With the onset of the cold season, pneumonia is a particular concern given the crowded and unhygienic conditions. MSF fears these trends may worsen unless conditions are urgently improved.