Médecins Sans Frontières/Doctors Without Borders (MSF) has provided comprehensive treatment of chronic illnesses, such as diabetes and hypertension, at the Dar Al-Zahra hospital in Tripoli and four clinics in the Bekaa Valley, Lebanon, since 2012. The program was developed in response to the high morbidity rate observed among the Syrian refugee population during the first months of the crisis.

This program has been incredibly important to a great proportion of these displaced peoples. To date, more than 50,000 people with chronic illnesses have benefited from free care.

Serious complications from lack of monitoring

“Diabetes is a disorder of sugar metabolism in the body, which leads to high levels of blood sugar,” explains Dr. Maria Lightlower, head of medical activities in Lebanon. “The pancreas, which is responsible for delivering the hormone, insulin, to regulate sugar levels, does not do its job or an inadequate job. This chronic disease thus requires constant monitoring and a specific treatment, together, in all cases, with supervision of the patient’s diet.”

The diabetic patient is never cured and the illness changes over time. Patients must regulate their blood sugar levels themselves via insulin injections or follow a strict diet, while maintaining regular physical activity.  If they fail to do so, they can experience serious and disabling complications.

“One of the most common complications is the loss of feeling, primarily in the legs and feet,” Dr. Lightlower notes. “Poor blood circulation can cause ulcers or infections which, if untreated, may lead to amputation.

“Lesions may also damage the small blood vessels that feed the retina, resulting in reduced visual acuity and, possibly, blindness.” The key to treating diabetes remains patient education and a healthy lifestyle.

“I lost everything in the war, everything,” says Mohammad, who has been a refugee in Lebanon for two years. “Today,  I have a huge responsibility for my family. I have to take care of them. So I make sure not to overlook anything that could lead to the amputation of one of my feet, for example.

“ I’ve seen that happen to other diabetics. The doctor explained clearly how to take care of myself and my wife is very careful about my diet.”

For thousands of other Syrians like Mohammad, living with diabetes in Lebanon remains a silent battle against the clock. A regular, healthy diet is difficult to maintain while money is lacking. The resulting complications leave them even more vulnerable, particularly while medical care is difficult to obtain. 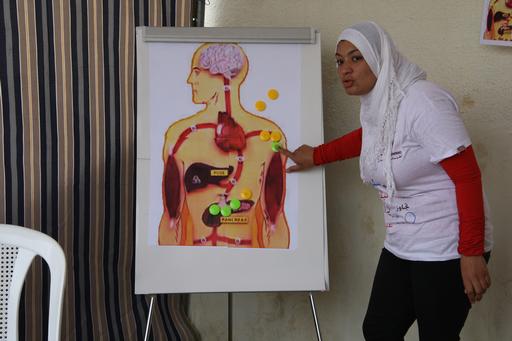 MSF/Ghazal Sotoudeh
At the Majdel Anjar clinic, an MSF volunteer explains how diabetic patients can control their blood-sugar levels.

The cost of transportation, medical visits and treatment are major obstacles in a country with a privatised health care system. Although the UN High Commission on Refugees covers 75 per cent of medical costs, patients are responsible for the remaining 25 per cent, as well as for certain laboratory fees. Despite this subsidy, this is still too much for families who are struggling to pay for housing and food as well.

“We fled Raqqa, Syria with my sisters and parents,” says Amina. “Our house was bombed. After several weeks in Lebanon, I ran out of insulin. So I went back to Syria with my father, where treatment costs one-third of what it does here.”

Amina and her family – seven people in total – are living under a tarp in Majdel Anjar, in the Bekaa Valley. They have been in Lebanon for more than a year. Some days, the father finds work.

The girls help with the household tasks, while awaiting a possible return. “I was four years old when I was diagnosed with diabetes,” the 19 year-old says. “I always had my insulin - except since I’ve been living here, because it is too expensive.”

A burden they could do without

Due to the considerable cost of diabetes treatment, some consciously defy the illness, out of weariness and a sense of despondency. “Why continue living under these conditions?” Ismael says. “If I must die, I must die. So I smoke.”

The thousands of diabetic Syrian refugees must redouble their efforts to prevent the traumas of their exile from affecting their health. The arrival of winter in Lebanon will only add to this challenge, as the war continues to rage at home.

Find out more about MSF's work in Syria and Lebanon

Arsal: Where else would we go?